We Need Your Vote! Ocient Nominated for 1871 Momentum Award 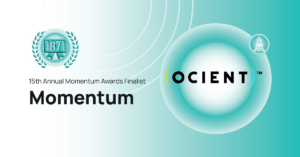 1871 is an independent, nonprofit innovation hub in Chicago named after the year of the historic Great Chicago Fire when “innovators came together to rebuild and re-imagine what’s possible.”

Now in its 15th year, the Momentum Awards honor Chicago-based tech innovators and leaders that are disrupting industries, building up their communities, & shaping the future. Ocient is nominated in the Momentum category which is presented to a growing company ($3 – $25M in revenue) with the strongest potential to emerge as a leader in its market.

A hyperscale data solutions company with an innovative architecture, Ocient has been built to maximize the benefits of modern NVMe SSDs. We deliver breakthrough performance on analytics workloads that process trillions of data records and beyond to a growing customer base looking to unlock the potential of data analytics at a scale previously only imaginable.

Ocient has a fully-remote staff (and hiring!) around the world but has deep roots in Chicago. Ocient Co-Founder Chris Gladwin had previously founded Cleversafe which became the largest and most strategic object storage vendor in the world (according to IDC).  Cleversafe was sold to IBM in 2015 for $1.3 billion, one of Chicago’s biggest-ever tech exits. Gladwin is also Co-Chair of P33, an organization in Chicago fostering better connections between Chicago teams and the global tech and innovation community to facilitate economic growth.

The winner of this award is in part determined by public vote, so help us win by voting before August 19, 2022! (Note: You will be asked to register with email and then you will place your vote by clicking the thumbs up icon. It should take less than 1 minute to complete and we really appreciate your support.)

The 15th Annual  Momentum Awards, 1871’s annual celebration of tech innovation, will be presented in a hybrid (in-person and virtual) format on September 22, 2022. Good luck to all the other nominees!